After spending eight years as a volunteer helping homeless youth find a path to college in her spare time, Ginny Donohue quit her job as a corporate CFO and founded On Point for College in 1999.

With no funding, and working alone and from the trunk of her car, she visited community centers in Syracuse’s inner-city to find and help young people who wanted something more from life, but didn’t believe that college was possible.

During On Point’s second year, Ginny met Sam Rowser—a community member with college access experience and a dedication to the success of young people, and they joined forces.  As the young program grew to include more and more students, new partners, financial supporters, and volunteers began to join the effort.

On Point for College has received national recognition from the National College Access Network and President Barack Obama, and has received grants from Microsoft, TG, USA Funds, the Lumina Foundation for Education, and the Kresge Foundation.

In recent years, On Point has received the following major awards, grants and recognitions:

On Point for College was featured as a select program on WCNY’s public affairs show, “Insight” (video)

On Point for College named key partner in the First in the World Grant—out of 24 grant awards and 500 total applications, On Point is the only community-based organization nationwide to be included in the grant.
See SUNY Oswego’s statement here.
See SUNY MVCC’s statement here.

Ginny Donohue, Founder of On Point for College, is a Temple Adath Yeshurun Citizen of the Year Honoree in Syracuse

On Point’s Ginny Donohue and Sam Rowser are selected to meet with President Barack Obama in Syracuse, NY and Binghamton, NY as the president toured the Northeast to address the state of higher education in the U.S.

On Point receives a three-year grant from USA Funds to create a summer institute for students who would use their financial aid taking remedial math and English courses. 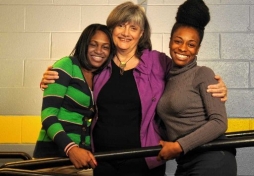 Syracuse's On Point for College gets $450,000 grant to help low-income students.

On Point receives a three-year grant from the Kresge Foundation to reach out to and provide special supports to students who are most at risk.

On Point selected as a New York State Partner, receives $1.9 million in federal funding to replicate the program in two new locations

Ginny Donohue shares her “aha moment” for a Mutual of Omaha