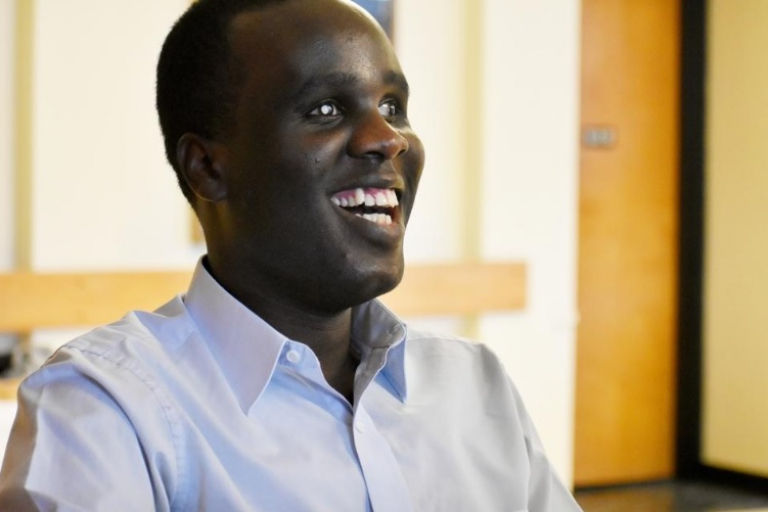 UTICA, NY - On Point for College Utica student Ahmat Adam Djouma thinks he was about 9 when his family took their farm animals and crossed the border from Sudan to Chad.

He’s not sure about his age because record keeping was not a priority in Sudan.

He remembers the journey, though.

“I remember one day they said that the rebel forces are coming and we have to leave,” Djouma said.

The next day, word was that the rebels were heading their way, so his family fled farther into Chad to a refugee camp. Most of their animals died along the way, he said, because they didn’t have food.

At the refugee camp, where he and six family members lived in a hot tent, Djouma’s life did change in one good way; he attended school for the first time. His parents had to fight to get him into the camp school, though, because the teacher didn’t know how to teach a blind student, Djouma said. He learned by memorizing lessons, including a 90-page book once.

When Djouma came to Utica as a refugee in December 2009 with his parents and eight siblings, he brought that determination to learn, a determination that has led him to Mohawk Valley Community College, where he is studying public policy, and has earned him national recognition.

Now about 22, he is one of eight community college students nationwide to be named a 2019 DREAM Scholar, an honor given to students at colleges in the Achieving the Dream Network. As a DREAM Scholar, Djouma will attend a program focused on leadership, critical thinking and networking skills.

The program culminates in a presentation made to 2,300 attendees of the network’s annual conference in Long Beach, California, from Feb. 19 through 22.

Each scholar also receives a $1,000 scholarship.

“If anybody’s going to do anything great, it’s going to be Ahmat,” said Valerie Warmuth, the teacher’s aide who helped him during all his years in the Utica schools. She now works part time at MVCC doing Braille and continues to see Djouma.

“My parents, they themselves having no education, really believed in education,” Djouma said. “Every day they encouraged us to get education. They believed that education opens doors.”

So far, Djouma has a brother at the University at Albany and two sisters at MVCC, one of whom is, like Djouma and another sibling, blind.

Djouma plans to transfer to a four-year college next year, possibly the University at Albany or SUNY Brockport. He hopes to continue on to graduate school and eventually work in government or as a lawyer.

Warmuth isn’t at all worried about the transition to a new school. In the past, she would worry when he started a new school. Now, she said, she’s realized that he always does well.

When Djouma isn’t in school, he still keeps busy; he doesn’t like to just stay home over his summers. Last summer, he interned with both Congressman Anthony Brindisi’s campaign and the Resource Center for Independent Living. He also took a CPR class with Warmuth’s help. The summer before he interned at Oneida County Family Court.

He’s also racked up a string of awards and honor.

But back in Chad, Djouma couldn’t even dream of everything he’s accomplished. He didn’t know there was a way for the blind to read and write. When he started at Thomas Jefferson Elementary School in 2010, he finally learned about Braille. He learned English and Braille at the same time, with the newly hired Warmuth learning Braille right along with him.

“It was exciting to learn to read. The first book that I started reading was ‘The Cat in the Hat’ by Dr. Seuss,” Djouma recalled.

Then he smiled, remembering how people would ask him about his favorite book when he was 13 or 14 and he would answer, “The Cat in the Hat.”

Reading wasn’t the only gift Djouma received when he came to the United States. He got a birthday — Jan. 1.

This story first appeared in the Utica Observer-Dispatch on February 16, 2019.