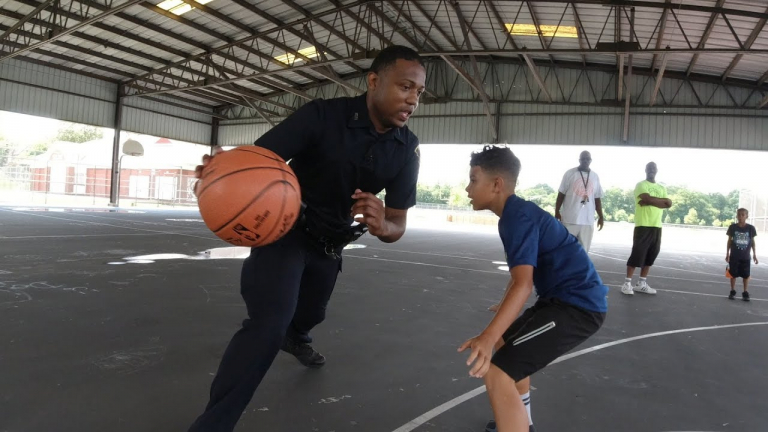 SYRACUSE, NY - Sitting in the lunchroom one day, then-Henninger High School student Brandon Hanks overheard some friends from the basketball team talking about signing up for On Point for College and “how you had to make sure you did it.” Hanks hadn’t heard of On Point before, and he didn’t have the teacher who was advising everyone to sign up, but he was interested anyway, and went to seek her out.

Joyce Suslovic, or “Ms. S.,” as the students call her, has been a mainstay of the Henninger Social Studies department for 18 years and she’s been pushing students towards On Point for nearly as long as its existed, since 2001. Today, Suslovic is a member of the On Point for College Board of Directors. But back in 2010, she didn’t miss a beat when a then-unknown student approached. She was happy to point Hanks in the direction of On Point. He took her advice and signed up for the program in 2010. With On Point as his “guardian,” this kid – who had no prior college ambitions – enrolled at SUNY Morrisville in January 2011.

Hanks recalls his time as an On Point student thoughtfully. “On Point was like the kick in the back that I needed. They helped with all of the hard stuff. The applications, the financial aid. They even came and had lunch with me when I was at school. I don’t think I’d have gone to college, let alone graduated, without them.”

Three years after he graduated from SUNY Morrisville in 2016, Hanks is busy achieving the unexpected once again. If you haven’t already put it together, there’s a reason Brandon Hanks looks familiar.

First it was the kids who took notice, then Syracuse.com, then CBS Evening News, and finally Los Angeles Lakers player Rajon Rondo. The now 27-year-old captured the public’s attention this summer when he started challenging local kids to one-on-one basketball games. What makes Hank’s “Pull Up Challenge,” as he calls it, particularly unique, is that he’s a cop and he’s offering local kids a chance to win a free pair of sneakers if they can beat him.

Hanks first posted the challenge on his Facebook page offering to “pull up” in his Syracuse Police Department squad car to wherever his challengers were and take them on one-on-one, with whomever scores first declared the winner. If Hanks wins, as he did for 27 straight games, the kid owe him push-ups. If the kid wins, as 7-year-old Josiah Brandon was the first to do in late August, Hanks personally buys them a pair of new sneakers. 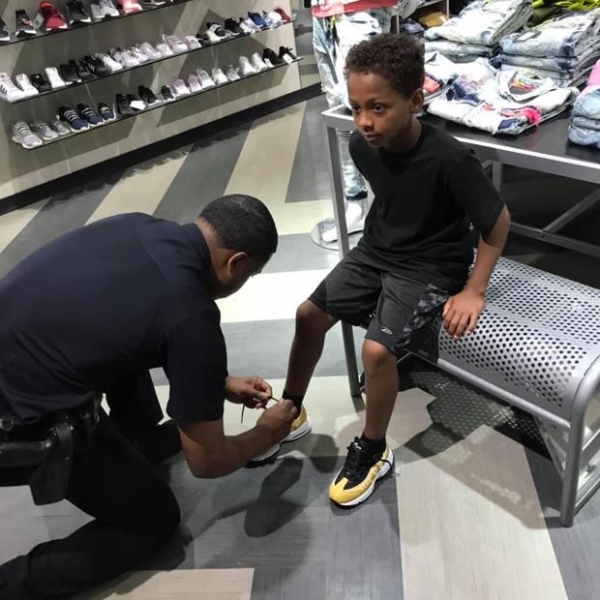 For Hanks, the Pull Up Challenge isn’t about getting attention, or spreading new Nikes around town, it’s about changing the image of police officers in this community. Growing up in a predominantly African-American community on Syracuse’s South Side, Hanks was afraid of police officers.

"I knew from personal experience, and from watching kids in the community, that people get nervous around the police. They don’t make eye contact, they don’t want to talk. It’s not a good relationship. I was a good ball player and I knew this was a skill I could use to connect. At first, I didn’t think the kids would let me play with them. But a lot of them – the teenagers especially – are really cocky. So I figured, I could be cocky too, and I started to challenge them and slowly they started to play with me."

Aware of the importance of image to teenagers, Hanks settled on sneakers as the prize and push-ups as the punishment for his challenge. “Push-ups are embarrassing. And it’s kind of humbling for the kids to have to do them in front of their friends. But it works. It breaks the ice, they smile, and it gets them to talk to me. I’m hearing from other cops that kids are starting to talk to them and ask them to play too.” And that’s his goal.

For Hanks, giving back to the community he grew up in wasn’t an option, it was an obligation. As an African-American male police officer from Syracuse, Hanks feels like it’s a no-brainer for him to use his position to try to improve the Syracuse Police Department’s relationship with the community they serve. And his colleagues seem to agree. Fellow officers offer words of appreciation and encouragement and have expressed interest in donating to the cause. The department’s higher-ups have even given him the freedom to travel across the city during his shifts to take on a Pull Up Challenge. But Hanks knows his work isn’t done. “It’s nice coming from me, but it would mean even more coming from the officers who didn’t grow up here and aren’t from the city. I broke the ice with the kids, now I’ve got to do it with the cops.”