On Point in the Washington Post: When a sudden, small expense threatens an entire college career 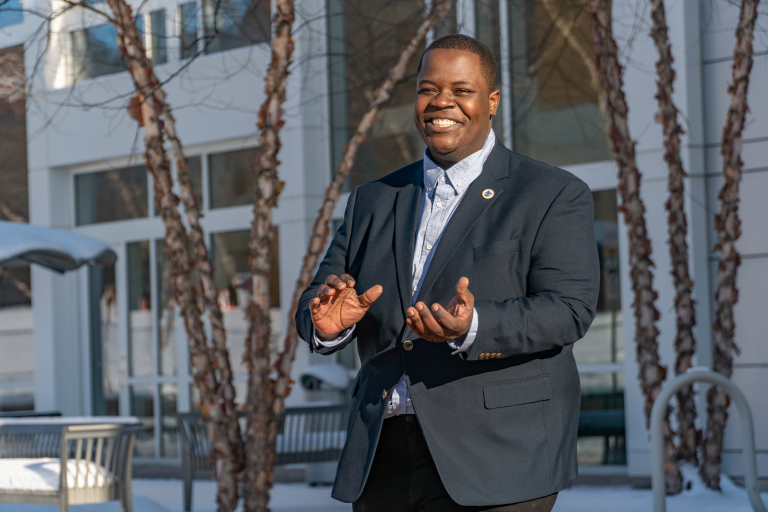 When a sudden, small expense threatens an entire college career

Some schools and nonprofits target the surprise hurdles — dorm deposits, rides to campus — that cause low-income students to drop out.

By Karen Weese | Originally published on washingtonpost.com on January 30, 2022

All he needs is a bus ticket. A single, one-way ticket to get from his home in Upstate New York to his first day of class at a college barely an hour away. It would have cost about $25.

He’d beaten the odds just to get accepted, filling out all the paperwork and meeting all the deadlines, despite growing up in a family in which no one had ever gone to college and attending a high school where a quarter of his peers wouldn’t make it to graduation. He’d earned several scholarships and registered for his courses. His bags were packed.

There was only one problem: He had no way to get there. His mother, who worked as a nurse’s aide, couldn’t afford a car. Neither could he, given the meager wages of his after-school job at the local Price Chopper. Even that bus ticket was out of reach.
Eighteen-year-old Giovanni Harvey had done everything right, but it wasn’t enough. His dreams of a degree were about to end before they started.
To a middle-income kid from a neighborhood with two cars in every garage, it may be incomprehensible that something costing less than a few burritos at Chipotle could derail a person’s college education. But for many young people across the country — growing up in homes where there’s little left after paying rent and utilities — the challenge is painfully familiar.

“This happens every day, to thousands and thousands of students,” said Alice Anne Bailey, a researcher and adviser on higher education policy with American University’s Center for Postsecondary Readiness and Success. “The number one reason that low-income students drop out is financial. And often it’s a little thing, that a middle- or higher-income family wouldn’t even think twice about.”

It’s not that the students don’t try to economize. Kesare Mowrer was a restaurant server while taking a full course load at the Community College of Philadelphia: She’d ride her bike to school, take classes until lunchtime, commute an hour by train to the restaurant, serve meals for nine hours, head back to the college to pick up her bike and pedal home — arriving around 10 p.m., exhausted, with hours of homework ahead of her.
Tony Williams worked at a dollar store and lived in his car while attending Cypress College in California, showering at public beach facilities and subsisting on protein bars and peanut butter sandwiches. At night, he’d back his aging car into a space in an underground parking garage and fold himself into the back seat.

Irene Adkins worked the overnight shift at a nursing home while attending classes during the day at Southern West Virginia Community and Technical College. Until she could afford a car to make the six-mile trip to and from campus, she walked.

Each wanted to be in college. Yet each ultimately dropped out.

“A lot of people think if you give a kid a scholarship, now the kid’s set, they’ve got everything they need,” said Chris Metzler, director of student services at Thaddeus Stevens College of Technology in Pennsylvania. “Nothing could be further from the truth.”

Across the country, some colleges and nonprofit organizations are recognizing these hidden obstacles and finding creative ways to clear the path. Their efforts offer a template for other institutions looking to attract low-income students, serve them and help them succeed.

“I had an incoming art student from Colorado who called me and said she was selling her senior art projects trying to raise the money for the plane ticket and wasn’t sure she could get here,” recounted Chris Lakes, director of student success and transition at Berea College in Kentucky, which serves high-achieving students from the bottom economic quintile. “I said, ‘Look, don’t sell your stuff, we’ll figure out a way to get you here.’” The school paid a portion of her airfare.

The New York-based nonprofit group On Point for College focuses in part on the transportation issues, coordinating volunteers to shuttle more than 150 students to and from their colleges every semester and for holiday breaks. It posts the student travel dates and destinations on its website for online driver sign-ups.

“We had one student whose family didn’t have a car and was so transient that she never went home to the same house that we’d picked her up from,” Executive Director Sam Rowser said. “We drove her to and from college for four years of undergrad and two years of medical school.” She is now a doctor.

For rural students from financially strapped families, simply getting to campus for a college visit can be a challenge. About five years ago, Michigan’s Marlette School District began taking all high school freshman and sophomore classes to at least one four-year university and one community college in the state. For its part, Central Michigan University underwrites some high schools’ costs if they organize a bus trip to its campus northwest of Saginaw.
And because staying overnight for such visits can cost more than many families can shoulder, prospective students and parents visiting Berea College can stay free in Sturt Cottage, a renovated house steps away from the admissions office, or get discounted rates at local hotels. At summer orientation, parents enjoy free lodging in Berea’s dorms.

“They bring their own toiletries and towels and bedding. This is not the Hampton Inn,” Lakes said. “But it allows them to participate in something they might otherwise be unable to afford.”

Housing deposits can pose another obstacle, according to Rowser: “We’ve had kids come to us and say, ‘Hey, I got into this great university, full scholarship, full ride, but they said I have to make a $300 deposit to secure my room, and I only have $200.’ So because this kid doesn’t have 100 more dollars, they can’t go to college? That’s crazy.” On Point contributes toward those deposits as needed, making up whatever the student can’t.
Then there are textbooks. The first time she tried to go to college, Mowrer had to withdraw after one class because the cost of her books totaled $300. She’d been told they’d be covered because of her parents’ income (about $13,000 annually) and her own modest earnings from a part-time job. But it turned out they weren’t — as she learned, to her horror, while standing in the checkout line at the student bookstore.

Still, for many of these students, it’s not just academic costs that make life hard. It’s basic living expenses, too. On Point, for one, gives its participating students a backpack, school supplies, bedding, alarm clock and a $150 clothing allowance before they leave for their first semester.

At Thaddeus Stevens College, bins of toothpaste, shampoo and other toiletries are scattered throughout campus offices, and students are encouraged to take as much as they need. The school has arrangements with several local dentists who will serve low-income students, and it maintains an emergency fund for unexpected dental or medical bills or other expenses.

“We had a kid who kept asking to borrow the ‘silver tape’ in the workshop, and his instructor finally figured out that he was using the duct tape to tape his boots back together, because he couldn’t afford new boots,” Metzler said.

It helps when colleges find creative ways to make paid work fit into students’ schedules, noted Adkins. At a satellite campus of Kentucky’s Lindsey Wilson College where she recently completed her bachelor’s degree, she was in a “weekender program” that allowed her to take classes in solid blocks on Fridays and Saturdays. From Monday through Thursday, she could still work the paralegal job that paid for her rent and living costs.

Berea provides employment in mutually beneficial ways. All students are required to have a 10-hour-a-week job on campus, which not only bolsters them financially but saves the college money on outside hires.

“We have about a third of the groundskeeping staff that a college our size would normally have, because two-thirds of it is student workers,” Lakes said. Students also work in Berea’s Boone Tavern Hotel; in the college’s Appalachian workshop, they make woven blankets and pottery for sale and shipment across the country. An on-campus job carries no stigma, Lakes added, because everyone has one.

Some bigger schools try to anticipate need in other ways. Georgia State University uses data analytics to comb student records and flag students with solid academic records who may be at risk because of modest tuition balances or unpaid fees. Advisors can award small “retention grants” — as little as $300 in some cases — to pay what’s owed, keeping the students in school without requiring them to ask for financial assistance.

Yet with more than 40 percent of U.S. undergraduate students coming from low-income families — which the federal government defines as household income at or below 150 percent of the federal poverty level, currently $41,625 for a family of four — the sobering fact remains that most colleges don’t offer much along these lines.

Metzler thinks colleges that don’t adapt are missing a huge opportunity, both for their own enrollment numbers and for their impact on society as a whole.

“When our college takes a kid who is economically disadvantaged, and he graduates with a degree, starts making good money, and goes back home and can buy a house, pay his taxes, and contribute to his community, that’s life-changing — not just for him, but for all of us,” he said.

Tony Williams eventually returned to college, as did Kesare Mowrer. He is studying human services at Cypress, and she is finishing her bachelor’s degree in accounting at Temple University. Both say outside support from their institutions, nonprofit groups and others has been crucial.

As for Giovanni Harvey, he did make it to his first day of college after all. An On Point volunteer arrived on his doorstep and helped him load up his few belongings; an hour later, he was unpacking in his new dorm room. “That one very basic necessity — transportation — literally made all the difference,” he said recently.

Harvey is now a senior communications major at SUNY Polytechnic Institute in Utica, where he founded a mentoring program and served as student body president. He will graduate in December.