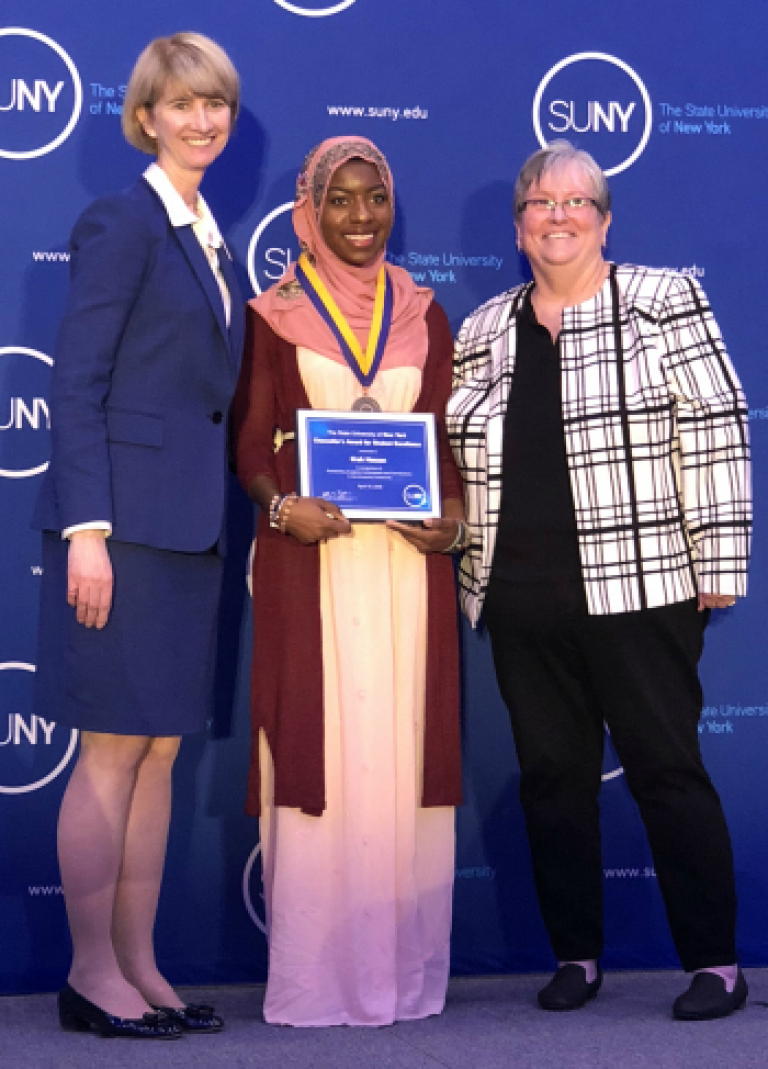 We are delighted to share that three On Point for College Utica students received the SUNY Chancellor’s Award for Student Excellence this spring: Kumari Regmi, who just completed her Master’s in Family Nurse Practitioner at SUNY Poly; Mya Kyaw, who graduated from Mohawk Valley Community College with an associate degree in biology in May; and Ifrah Hassan who completed her associate degree in liberal arts and math and science at Onondaga Community College in December and is now pursuing her bachelor’s at SUNY Binghamton. All honorees combined academic excellence with other accomplishments, including leadership, campus involvement, community service, and more. Congratulations to all of our awardees!

Ifrah Hassan’s (center in photo at right) journey to success begins with her family's emigration from Somalia, to a refugee camp in Kenya where Ifrah was born, and finally on to Utica. The youngest of seven children - five girls and two boys - Ifrah arrived in America at the age of four. Like so many On Point students, she has become the first in her family to graduate with a college degree. In contrast, her parents first learned to write in the Mohawk Valley Refugee Resource Center in Utica. Although Ifrah’s parents received no formal schooling, they have pushed her very hard to succeed - and given her the freedom to pursue her studies away from home.

Coming to America was not without its challenges for the Hassans. In most traditional Somali Bantu families, parents are encouraged to keep their children as close as possible. The idea of sending a child - especially a female child - away to college is almost unheard of. For the Hassans, allowing Ifrah to leave Utica for college created a dilemma. On the one hand, Ifrah could bring honor to her family through her achievements. (She'd already demonstrated her ability to do this when she completed her entire college freshman workload in high school!) On the other hand, Ifrah's craving for an American style of independence could, in the traditional sense, dishonor her family.

In some ways, Ifrah is fortunate to be the youngest child in her family. She has grown up to be an ambitious, independent woman who recognizes the incredible support her family has provided, but at the same time, she is also bold enough to push up against the limits of their protectiveness. In the end, the Hassan’s desire to support and encourage Ifrah’s success won out over their desire to adhere to traditional norms. For Ifrah’s family, this has meant allowing her to leave Utica to live and study on her own, first at OCC and later at SUNY Binghamton.

Ifrah has adapted to this freedom admirably. She has been a member of the Honors Program since her freshman year, and was inducted into Phi Theta Kappa during her second semester at OCC. Before graduating, she also became an Ambassador for the Honors Program and Collegiate Science and Technology and Engineering programs.

These days, Ifrah is busy working towards her degree in neuroscience at SUNY Binghamton, where she is also considering also adopting a major or minor in African studies. Inspired by her own sisters’ experiences giving birth with the assistance of male doctors, Ifrah has set her sights on becoming an obstetrician. She hopes to ultimately help other women like her sisters avoid the potential discomfort of having a male stranger handling intimate moments like childbirth. Despite the fact that becoming a doctor would bring incredible honor to Ifrah’s family and her community, she reflects on the possibility with characteristic modesty, musing only that "doctors are very valuable in Africa."

Ifrah has been especially grateful for On Point’s support. She took full advantage of getting rides to and from school, and she’s very thankful for the dorm necessities she received. Her advice to other students is simple and bold: don’t be afraid to do anything. Specifically, have the courage to approach leaders, professors - anyone - at conferences. "You will open doors and opportunities by talking to people."

Ifrah’s dream of raising the bar for her family is being realized today. Her niece, Sharifay Mohamed, has enrolled at Daeman College - even farther from Utica, in Buffalo. Sharifay has joined the On Point for College family of students, too.

Here’s to Ifrah Hassan, and her continued success - and likewise to her family!