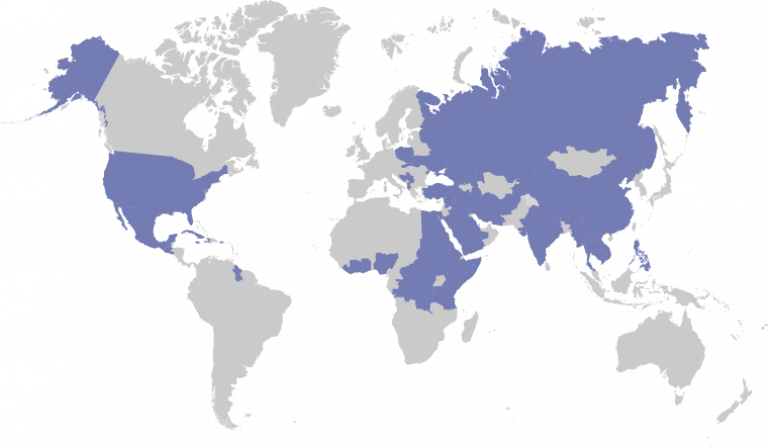 It’s moments like these that make us exceptionally proud of our colleagues and also encourage us to reflect on the broad reach of the On Point for College program. While we are well known for helping many of our native-born youth, over the years we have also had the privilege of helping immigrants and refugees from over 40 countries and territories find a pathway to higher education. Not only does the success of these students and graduates improve the quality of their lives, but it also strengthens the foundations of our communities and inspires countless others who have overcome many obstacles just to be here to continue to pursue their dreams.

Please join us in congratulating LuPway Doh and Abeer on becoming American citizens and in coming one step closer to achieving their dreams!

Where On Point for College's Students & Alumni Come From 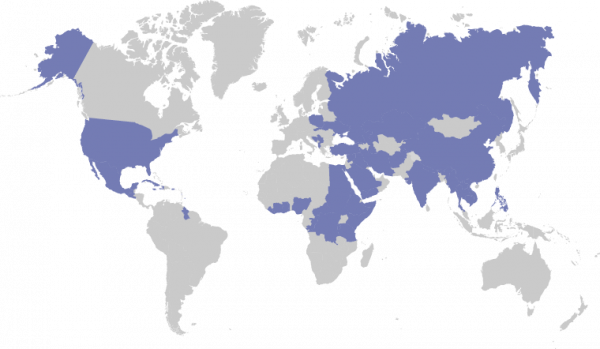 On January 26, 2017, On Point for College Utica employee LuPway Doh – all one name – got something he’d never had before. Citizenship. Born along the border of Burma (also known as Myanmar) and Thailand, and a member of a persecuted ethnic group, the Karen Burmese, LuPway Doh spent his early years living in the margins between two countries. He had no legal identification documents and was not recognized as a citizen by either the Thai or Burmese governments. 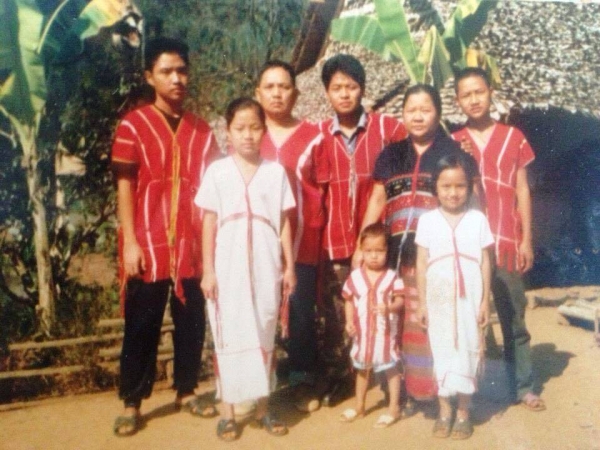 LuPway Doh (far left) with his family in Thailand.

The conflict with the Burmese government, which displaced LuPway Doh’s ethnic Karen family, began in the years immediately following World War II and has become one of the world’s longest running civil wars. It forced LuPway Doh’s parents from their home village in the late in 1970s and into the borderlands where he and his siblings were born. The family made their lives here, in the land between states, until the mid-1990s.

In February 1995, Burmese government soldiers attacked Karen settlements in the borderlands, forcing some ten thousand Karen to flee further into Thailand. LuPway Doh and his family were among those who abandoned their homes and sacrificed their livelihoods for survival in a Thai refugee camp.

LuPway Doh spent the next seven years in refugee camps, attending and ultimately graduating from Karen high school in 2000 and then enrolling in an intensive international GED program. Throughout this time, he often studied six days a week, leaving the camps only briefly to attend church on the weekends. His hard work paid off and he was awarded a scholarship to Assumption University in Bangkok.

Although he ultimately graduated with a degree in telecommunications science in 2009, his time in college was especially stressful. Bordering two countries with unstable political systems had made Thailand a hotbed for refugees and illegal immigrants. While his program had provided LuPway Doh with some documentation to help protect him, he lived in constant fear of being stopped and arrested by Thai police and deported to Burma.

Realizing that he would never have a safe and stable existence in Thailand, after graduation LuPway Doh applied for refugee resettlement to the United States. In 2011, LuPway Doh was granted political asylum and he arrived in Utica, New York on July 7th. 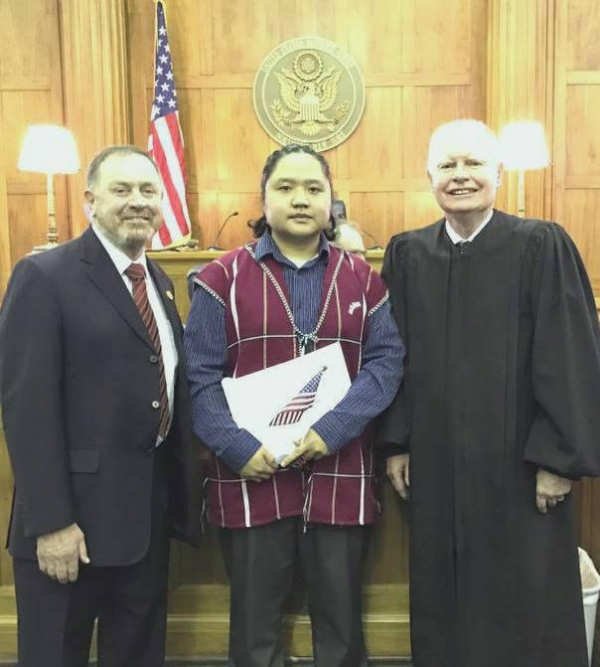 LuPway Doh has now made his life in Utica, working first as a translator and with other Karen Burmese refugees at the Mohawk Valley Resource Center for Refugees, before joining On Point for College in 2013. LuPway Doh’s strong connection to the growing Karen and immigrant populations in Utica has made him something of a “magnet” for On Point. Each year, he writes a letter to all of the Karen churches in town, reminding them about On Point and its services. Over time, not only has this resulted in a large number of Karen youth joining On Point, but it has also spread by word of mouth from these students to other non-Karen students. This has resulted in a pipeline from the high schools and community centers to On Point and helped the Utica office exceed their recruitment targets every year since LuPway Doh joined.

This past January marked not only the first time LuPway Doh had been claimed as a citizen by any nation, but it also put him one step closer to achieving his lifelong dream of working for a government. “I needed so much help to go to college and get out of the refugee camps, I want to give back a bit of what I have received, to help people who are in need. Working for the government… I can do that, but you need to be a citizen to work for the government.” 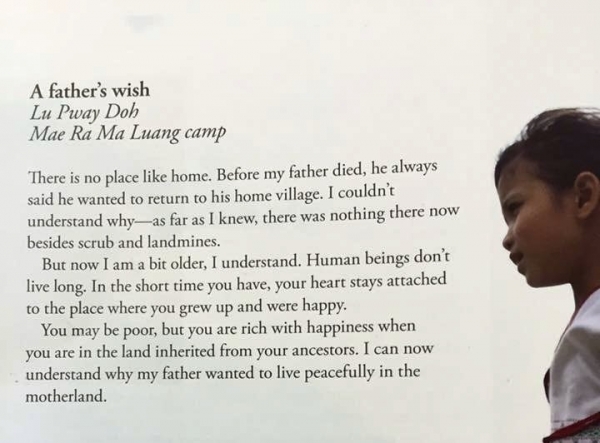 A published poem written by LuPway Doh about his experience as a refugee.

Abeer Alziadi has always been a leader. When her family moved from New York City to Syracuse just before her senior year at Henninger High School, it was Abeer who took responsibility for making sure that her siblings were enrolled in school, that the family had a doctor, and that everyone’s paperwork and documents were complete.

Notwithstanding her preternatural ability to manage issues most teenagers don’t even have to think about, the move to Syracuse made Abeer feel lost. Starting at a new school so late in her high school career was especially difficult. Recognizing that she was struggling, a caring guidance counselor reached out to Abeer. Miranda Williams helped Abeer graduate on time and connected her to both On Point for College and Mercy Works, which got her on the track to college and helped her secure a summer internship. 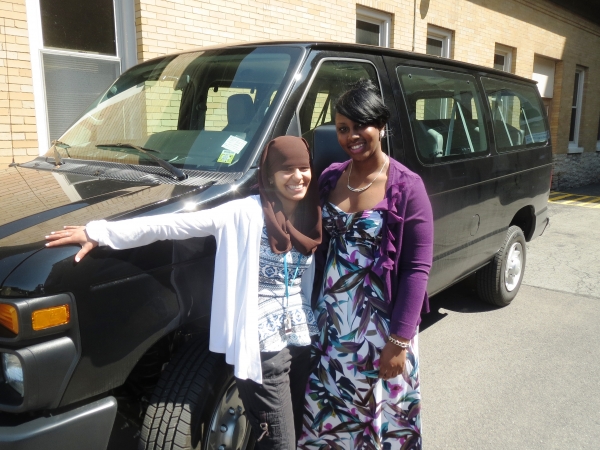 Abeer (left) and another On Point for College student next to an On Point van.

As she settled in, Abeer started to realize that being in Syracuse had its advantages. Living in Harlem, she’d gone to schools where everyone looked pretty much the same and she and her siblings had been the ones to stand out. “We moved to America from Yemen when I was two. I don’t even remember Yemen, but I’m Muslim and I wear a scarf, so I’m different! In New York, especially around 9/11, people didn’t know how to deal with us and we were young so we didn’t understand or know how to articulate our differences. It got physical a lot. Kids would rip off my scarf and I would get into fights. Harlem was tough, both the environment and the culture.” Abeer soon realized that her “differentness” was just less of an issue in Syracuse. “Being here was eye opening. I’ve never seen so many refugees and so much diversity. New York is so big, I just wasn’t exposed. Everyone in my high school was pretty much the same, but here I meet all kinds of people all the time and people are just more open.”

In fact, it was during her first summer in Syracuse, while interning through Mercy Works’ SYNERGY program, that Abeer first got an even bigger shot at belonging. During one of the internship program’s weekly leadership classes, a teacher asked who was planning to vote in the next election. When everyone but Abeer raised their hand, the class noticed and wanted to know why. “I had to explain that I wanted to vote, but couldn’t because I wasn’t a citizen. I don’t think that idea had really occurred to most of them.”

When it came time for the internship class to choose a project to sponsor that summer, Abeer was stunned when they decided to make her the subject of their class project. “Through their Barney II Foundation, Bill and Sabra Reichardt donated $100 to each of us to put towards a project that would improve our community. Seven of my classmates decided to give their money to me so that I could apply for citizenship. I first applied in 2012, but my paperwork got lost and I didn’t really understand the process. But people – my friends from class – kept asking me about it so I felt like I had to follow through with this – especially for them. I was always going to do it, but having their sponsorship and support made it easier. It was like they opened the door for me and said ‘Hey, walk in.’”

This ongoing support and encouragement led Abeer to reapply in 2016 and eventually to the Onondaga County Court House on January 26 of this year where she became the first member of her immediate family to become a U.S. citizen. “When I finally did it, I wanted to make sure my friends knew. I wanted to make them a part of it. They were really excited for me. I was really excited for me. Becoming a citizen... I’ve been here my whole life. I feel like this is my country. I feel like I should have a voice. I don’t want to be silenced because I’m not a citizen. I want to be able to speak up and claim my space… and now I can.” 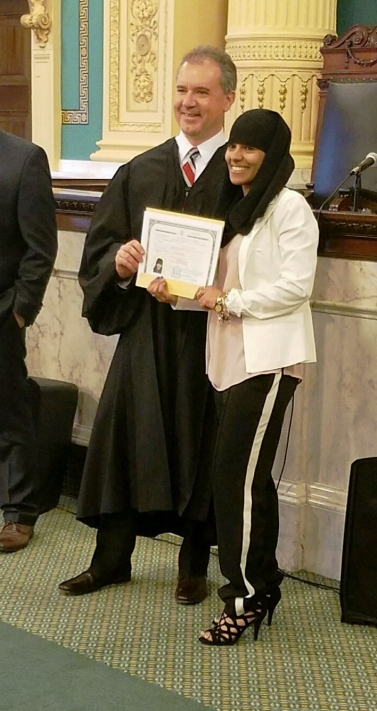 Today, Abeer has an associate degree from Onondaga Community College and is a senior majoring in social work at Syracuse University. She’s currently interning with Interfaith Works of Central New York, helping refugees and new immigrants get settled. She has even occasionally worked as a college access advisor for On Point. “It’s like a big circle. First someone helped me and now I’m helping other people.”